this is one chapter of a work about ghosts. thibault

The kid is around 7. They moved there when he was 4. Before they lived in Chile. His mum went a few times travelling to Argentina and Brazil to find this place; when she saw it she thought: [...]

The kid is around 7. They moved there when he was 4. Before they lived in Chile. His mum went a few times travelling to Argentina and Brazil to find this place; when she saw it she thought:

This is our home. The kid has curly blond hair and intense blue eyes. He's often mistaken for an angel. He has 4 brothers and sisters and 4 others will come.

The building is a U shaped. It is white turning yellow. When you come from the road to enter through the huge door, there is a pond on the left in front of the house. Sometimes the kids plunge through it's green water. Most of the time though, they prefer to go swim in the river delimiting the property. It is still on the left of the house but after the fields. They have been catching small fish and brought them back to the pond. One day, his little brother will eventually eat one.

The kids sleep in the rooms in the left wing. The left wing is newer than the rest. It was built during the boarding school times. You have to enter the big door, go left through a long corridor and through the living room. Open the flap-flap door. It rumbles and creaks during the night. Go through the dormitory and its neon light. Open the second flap-flap door and it is the end of the left wing with six sleeping rooms.

The parents left Europe. It was the only way to run after their utopia. They found this amazing place. They built their own beliefs and their own mythology out of a Christian past, Buddhist texts, Rudolph Steiner's theory, alternative medicine books, ... The father was a well-known scientist before; the university didn't want him any more because of his openness toward alternative medicine.

The parents say they believe in reincarnation. They say the kid chose his family from up the sky and then he was born. He grew up in South-America with its witchcraft and shamanism. The mysterious world is something normal.

Besides, UFOs researchers often come to Capilla Del Monte. The small town is also famous for its mountain with healing rocks.

The right wing of the house is the oldest. The monks used to live there. Some say they are still living there. It has wooden bricks on the floor. If you take the corridor to the right, there is the kitchen with a big table in the middle. The family use to eat in the kitchen. But for birthdays, they always celebrate in the dining room. It is in front of you when you enter through the big door. There is a huge painting of the Last Supper in the dining room.

After the kitchen, there is the library separated in two rooms. If you look outside from the library you see a line of poplars. Under one of them, there is a place where the kids found old coins. After the poplars, the land continues covered with bushes. The family often walks through it to go to the top of the hill. They go there for picnic or just to be quiet. The view goes until the villages and further. In the summer, there are a lot of fires all around the area because of the bushes. Everybody in the region helps. The kids as well. They are the “bomberitos”.

There are six rooms after the library. It used to be the monks rooms. The last one, on the right corner, has become the delivery room. On the left of the rooms, leaning against the building and inside the courtyard, there is a chapel. The father died there. An overload of work. One week sick. He chose to be in the chapel. One week sick and then he died. The utopia was gone. 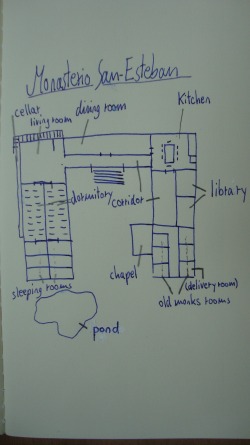 They were all eating in the kitchen. The kid turned his head toward the door leading to the corridor getting in the library. The door had a window on the upper part. The kid saw a guy with a bold head. He turned back and said to his mother: -Mum, there is somebody on the door. Everybody looked. There was nobody. They went to check, opened the door, looked around. Still nobody. The mother said: “It was a monk. I saw them many times. No need to worry”.